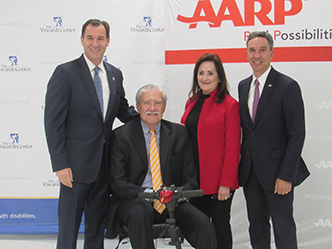 The Viscardi Center was the stage for last night’s debate between Republican New York State Senator Jack Martins and Democrat and former Nassau County Executive Tom Suozzi for the Congressional District 3 seat being vacated by Congressman Steve Israel. The debate, sponsored by The Viscardi Center and AARP, drew close to two hundred residents from the community, primarily seniors and people with disabilities.

“We believe everyone should exercise his or her right to vote,” said John D. Kemp, President and CEO of The Viscardi Center during his welcome remarks. “We are delighted to host this debate since people with disabilities have many of the same concerns as the aging population – healthcare, employment, transportation, medical equipment needs, financial security. We hope tonight will provide the insight voters need to cast an educated vote on Election Day.”

About The Viscardi Center
Founded by Dr. Henry Viscardi, Jr., who served as disability advisor to eight U.S. Presidents and became one of the world’s leading advocates, The Viscardi Center educates, employs and empowers people with disabilities. It provides Kindergarten through High School education (up to age 21), school-to-work youth transition services, vocational training, career counseling and employment placement, assistive technology, and adapted driver education to children, adolescents and adults with a wide variety of disabilities. The Center also assists businesses in diversifying their workforces, as well as developing and advancing disability inclusive cultures in their workplaces.