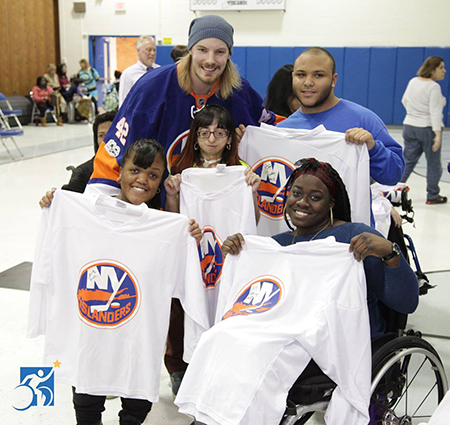 Four members of the New York Islanders teamed up with the Henry Viscardi School at the Viscardi Center to demonstrate that Hockey is for Everyone on Wednesday, February 1.

Scott Mayfield, Calvin de Haan, Shane Prince, and Anthony Beauvillier, accompanied by mascot Sparky the Dragon, stepped off the ice for the afternoon to visit the Albertson-based school and play wheelchair hockey against students — many of whom have severe physical disabilities. Viscardi came out winners with a final score of 4 – 3.

“We enjoyed it, I think, more than they did, maybe,” defensemen Scott Mayfield told an NHL reporter. “It’s not an easy sport out there. It’s definitely harder than what we do on the ice. My forearms are pretty tired.”

The Islanders have a long-running relationship with Viscardi, having visited the school annually for decades. But this year, the wheelchair hockey game also supports the NHL’s commitment to its Hockey is for Everyone program, a new initiative that aims to encourage teamwork, inclusion, and diversity during the month of February.

“It doesn’t matter if you’re able bodied or if you have some difficulties,” a Viscardi student named Nettie said. “I think you can find a way to do it. The kids here, they stick the hockey sticks to their chairs or use their hands. I think it’s really good that they can play.”

The Henry Viscardi School at The Viscardi Center is a New York State supported school that offers parents of children with severe physical disabilities and who often require life-sustaining medical treatment throughout the day, a traditional educational setting option that provides rigorous academics and opportunities for personal growth and leadership development. Its specialized, accessible educational setting provides a fully enriched academic program, a variety of therapies, assistive technology, and medical supports to students who may otherwise need to receive instruction in their homes or a hospital.

Founded by Dr. Henry Viscardi, Jr., who served as disability advisor to eight U.S. Presidents and became one of the world’s leading advocates, The Viscardi Center educates, employs and empowers people with disabilities. It provides Kindergarten through High School education (up to age 21), school-to-work youth transition services, vocational training, career counseling and employment placement, assistive technology, and adapted driver education to children, adolescents and adults with a wide variety of disabilities. The Center also assists businesses in diversifying their workforces, as well as developing and advancing disability inclusive cultures in their workplaces.