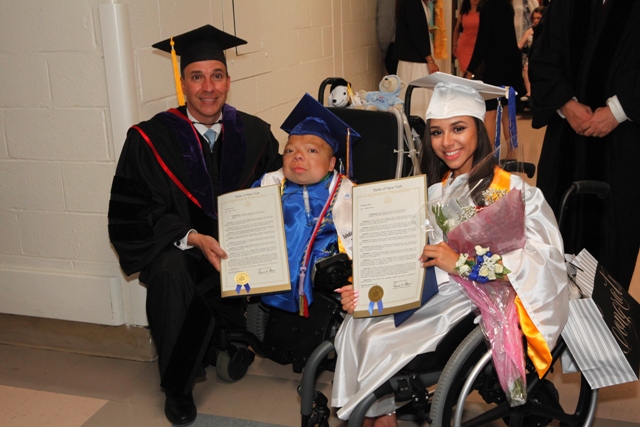 In a speech delivered during the Henry Viscardi School at The Viscardi Center commencement on June 23, 2016, Senator Jack M. Martins of New York’s Seventh District congratulated the Class of 2016 and urged graduates to continue advocating for their alma mater in the future. His address capped off the 49th graduation ceremony for HVS, a pre-K–age 21 school that meets the academic, medical, and assistive technology needs of students with severe physical disabilities.

“Let me start by saying I love this place,” Martins said. “What a special time I have had these past six years representing this school in my senate district. The opportunity to meet students, dedicated staff, and administrators — it’s truly a miracle.”

John D. Kemp, president and CEO of The Viscardi Center, described the senator as a steadfast backer of the school. “Senator Martins has taken a sincere interest in our students and has rallied overwhelming support from the state legislature when we needed it most,” he said.

Martins, who is campaigning to represent the New York’s third congressional district in the United States House of Representatives, has worked closely with students and staff to ensure that the school receives adequate funding each year. During his speech, Martins reminded graduates that HVS still needs their support.

“The Henry Viscardi School is a truly remarkable and special place,” he said. “Wherever you go, no matter how far away, it will always be a part of who you are. Remember it, and more importantly, stay involved so it stays that way for those who follow you.”

Many of this year’s graduates have enrolled in higher education institutions, including Adelphi University, Hunter College, Marist University, and local community colleges. Others are exploring employment opportunities and vocational programs their communities.

Valedictorian Christopher Alvarez will major in communications with a concentration in broadcasting at Adelphi University this fall. During his speech, Alvarez described how the Viscardi community pushed him to rise above his physical limitations.

“What I love most about the Henry Viscardi School is that its doors are open not just for me, but for my peers who face the challenges of physical disabilities in their daily lives,” said Alvarez, whose academic journey began in the HVS pre-K program. “This school has been a respite of hope and strength. It emanates the light within us that cannot be extinguished.”

Like Alvarez, salutatorian Mariah Sepulveda has served as a student ambassador for the school in Albany — having met with Senator Martins many times over the years — and at fundraising events, and now has her heart set on a degree in communications.

“Being a student at Viscardi since Kindergarten has opened tons of doors for me throughout the years,” she said. “I’ve been involved in many extracurricular activities where I got to show my strengths as a leader, team player, and advocate for my fellow classmates and friends.”

Sepulveda plans to spend her first semester at Hunter College, but has recently accepted an offer to attend Marist College in the spring of 2017. There, she hopes to realize her dream of becoming a motivational speaker and writer.

As graduates prepare to move on, Kemp encouraged all to remain motivated and vocal about the merits of their school and the strength of their peers. “Continue to take pride in your disability and shape the world for all of us with — and without — disabilities.”

Check out photos from the ceremony and watch the award-winning video produced by the Class of 2016.

The Henry Viscardi School at The Viscardi Center is a New York State supported 4201 school that offers parents of children with severe physical disabilities and who often require life-sustaining medical treatment throughout the day, a traditional educational setting option that provides rigorous academics and opportunities for personal growth and leadership development. Its specialized, accessible educational setting provides a fully-enriched academic program, a variety of therapies, assistive technology and medical supports to students who may otherwise need to receive instruction in their homes or a hospital.