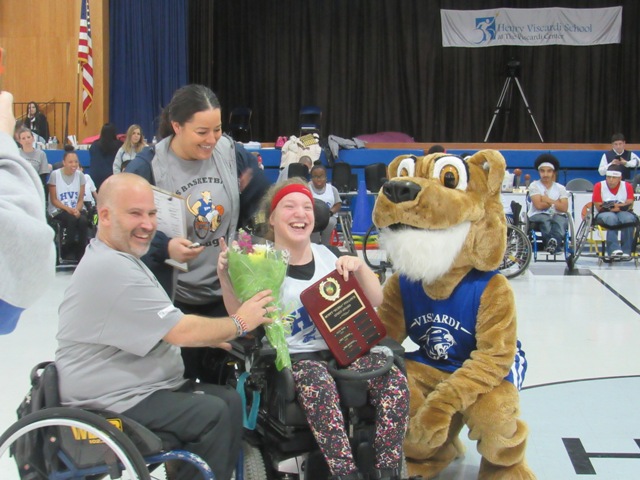 The Henry Viscardi School (HVS) at The Viscardi Center’s Wheelchair Basketball Program hosted its 25th annual Sportsmanship Tournament on December 3, 2016. Several games led up to the final championship round of the day, with the Viscardi Varsity Cougars playing against the competitive Westchester School for Special Children team. The Varsity Cougars claimed victory on their home turf, winning over Westchester 24-14 to receive the first-place trophy.

Sponsored by the Lisa Gerstman Foundation, the all-day event provides a unique opportunity for HVS students, who have severe physical disabilities and are often medically fragile, to compete against peers from other schools. HVS’s elementary school Cubbies, JV Cougars, and Varsity Cougars hit the court to go head-to-head against the Westchester School for Special Children and UCP Westchester, as well as staff and HVS alumni.

During half-time each year, a Viscardi senior player is chosen to receive the Scott “Bubba” Pollock Award—an honor named after a late captain of the Viscardi Cougars. Emma was this year’s award recipient for demonstrating school spirit and sportsmanship on and off the court.

“I’m just shocked,” Emma said shortly after receiving the trophy before a cheering crowd of friends, faculty, staff, and sports fans. “I never expected to win, but I’m so happy that I did.” Emma plans to study social work next year in college, and later hopes to build a career on serving underprivileged children.

“The Henry Viscardi School Wheelchair Basketball Sportsmanship Tournament means a lot to our players,” said Joe Slaninka, Head Basketball Coach at HVS. “Playing basketball allows our students to do something that is considered ‘normal.’ The tournament is my favorite part of the year because it brings everyone together to celebrate a great program.”

About the Henry Viscardi School
The Henry Viscardi School at The Viscardi Center is a New York State supported school that offers parents of children with severe physical disabilities and who often require life-sustaining medical treatment throughout the day, a traditional educational setting option that provides rigorous academics and opportunities for personal growth and leadership development. Its specialized, accessible educational setting provides a fully-enriched academic program, a variety of therapies, assistive technology, and medical supports to students who may otherwise need to receive instruction in their homes or a hospital.

About The Viscardi Center
Founded by Dr. Henry Viscardi, Jr., who served as disability advisor to eight U.S. Presidents and became one of the world’s leading advocates, The Viscardi Center educates, employs and empowers people with disabilities. It provides Kindergarten through High School education (up to age 21), school-to-work youth transition services, vocational training, career counseling and employment placement, assistive technology, and adapted driver education to children, adolescents and adults with a wide variety of disabilities. The Center also assists businesses in diversifying their workforces, as well as developing and advancing disability inclusive cultures in their workplaces. Learn more at viscardicenter.org