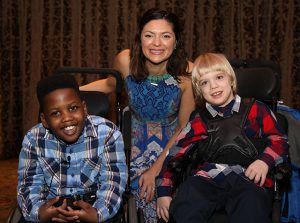 Albertson, N.Y.— The 35th Annual Reach for a Star Luncheon, presented by Americana Manhasset, delivered a “wicked” good time in benefit of students with severe physical disabilities at the Henry Viscardi School (HVS) at The Viscardi Center.

Special guest Jennifer DiNoia, who plays Elphaba in the long-running musical Wicked on Broadway, performed “Defying Gravity” and several other songs at the fundraiser, which drew 500 attendees to the Crest Hollow Country Club on April 4, 2017. The event raised over $280,000 to be directed toward afterschool programs and extracurricular activities at the Henry Viscardi School.

“Today is a true milestone,” The Viscardi Center’s President & CEO John D. Kemp said. “Not only because it’s the Reach for a Star Luncheon’s 35th anniversary, but also because of the record-breaking attendance and monies raised.”

Students at HVS often require life-sustaining medical supports throughout the day, leaving few options for socialization outside the classroom. The Reach for a Star Luncheon was established to raise support and awareness for programs and activities like adapted sports, the arts, and recreational overnights — enriching experiences that afford students with disabilities the opportunity to explore interests, enjoy a sense of independence, and spend time with friends.

“These and other experiences at our school allow our students to nurture their love of learning, form and strengthen lifelong friendships, create school spirit, and most of all, dream,” Kemp said. “Thanks to our supporters, these opportunities will continue to expand and grow.”

The Luncheon began with a cocktail hour, featuring over 100 auction and raffle prizes, and concluded with a rousing performance by Jennifer DiNoia and HVS second graders. Special guests at recent Luncheons have included Chilina Kennedy, former star of Beautiful: The Carole King Musical; Hoda Kotb, co-host of NBC’s TODAY’s fourth hour; the ensemble cast from Kinky Boots; and Elise Testone, a finalist on American Idol.

Education goes beyond the classroom at the Henry Viscardi School. Watch the Reach for a Star video to learn more about the unique opportunities available to children with disabilities.

Click here to view photos from this unforgettable afternoon.

The Henry Viscardi School at The Viscardi Center is a New York State supported school that offers children with severe physical disabilities, who often require life-sustaining medical treatment throughout the day, a traditional educational setting option that provides rigorous academics and opportunities for personal growth and leadership development. Its specialized, accessible educational setting provides a fully enriched academic program, a variety of therapies, assistive technology, and medical supports to students who may otherwise need to receive instruction in their homes or at a hospital.

Founded by Dr. Henry Viscardi, Jr., who served as disability advisor to eight U.S. Presidents and became one of the world’s leading advocates, The Viscardi Center educates, employs and empowers people with disabilities. It provides K-12 education, school-to-work youth transition services, vocational training, career counseling and employment placement, assistive technology, and adapted driver education to children, adolescents, and adults with a wide variety of disabilities. The Viscardi Center also assists businesses in diversifying their workforces, and developing and advancing disability inclusive cultures in their workplaces.